Dublin Pride has announced this morning that the usual physical Pride and Mother Block Party is cancelled.

They have stated that:

It is with great regret that Dublin LGBTQ Pride has decided to cancel our annual Pride Parade for 2020. Although we had initially postponed the Parade until September, we feel the scale of one of the largest events in the country would place unnecessary pressure on essential frontline services and resources that will have been at full stretch for many months. When we chose “In This Together” as our theme for 2020, we knew it was not just a phrase, but a responsibility. A responsibility to act in the best interests of all our communities, to react to changing circumstances and to support our frontline workers.

But Dublin Pride realise that this part of the year is huge for LGBTQIA+ organisations to raise funds and so are moving Dublin Pride virtually.

The official Digital Dublin Pride festival launch is May 22nd  where a 30 minute live stream with the Lord Mayor and special guests will talk. It also coincides with the 5th anniversary of marriage equality so there will be a mix of pre-recorded and live footage.

Digital Dublin Pride will take place during Pride’s usual dates which are June 18th-June 28th. A number of online events by Dublin Pride and LGBTQI+ organisations will be hosted including a virtual walking tour, talks, exhibitions and more.

June 28th the virtual pride parade takes place with Paul Ryder and Eddie McGuinness with a mix of pre-recorded and edited submissions from community organisations, partners, the public. Followed by the Pride Concert.

6PM
As part of GCN’s In And Out Digital Festival of LGBT+ Creativity – it’s time to get moving with Queer Yoga from The Yoga Root!

Wrap up the week on Friday with the ultimate in fun workouts as the fabulous Derrick Dark from The Yoga Root in Westport will be online at 6pm on our GCN Facebook page to lead a exceptional class.

Derrick shared, “We will sweat, we will dance, and we will POSE, baby! So bring your fans, wear your jewels, and put on your heels if you dare. Don’t worry, we’ll start with a warm up and a short flow to get things cookin’ before we get into the bigger poses. We may end in a meditation, or a dance party… who knows. Just show up.”

Now how can you argue with that?!

8pm
Come along to our virtual Queerantine Quizz this Friday at 8pm! It’s set up to be a very good one indeed.

The one and only Bunny O’Hare will be our fabulous host and the winner will walk away with their very own Google Smart Home speaker.

Entry is €10 per table/screen and log in details will come your way before we kick off. You can register at: https://www.belongto.org/queerantine-quiz/

Drag Race Watch-Along with us! Let’s watch and react to the next episode of Drag Race.
https://www.meetup.com/lgbtq-2030-ladies-dublin/events/269875854/

Dublin Lesbian Line Zoom Quiz
What better way to spend a Saturday evening in these challenging times than a quiz? Join us next Saturday from 8pm on Zoom.
Zoom link https://us04web.zoom.us/j/818896438…

Quarantine Queens
Find your inner quarantine QUEEN by tuning into the best mixes from your fave femme, womxn, and nb artists on ZOOM every week till the end of lockdown 💖🚨 LINK TO BE POSTED ON THE EVENT PAGE AT START OF STREAM 🚨https://www.facebook.com/events/2258525094457352/?event_time_id=2258525137790681

A new club night called ‘Blasphemy‘ has offended Dublin’s LGBTQIA community by describing themselves as LGBTQS+ the S meaning straight.

Here they are messaged by twitter user @brianmacuidhir and when asked about this and replies look like the need and point of queer spaces goes over the organisers heads. 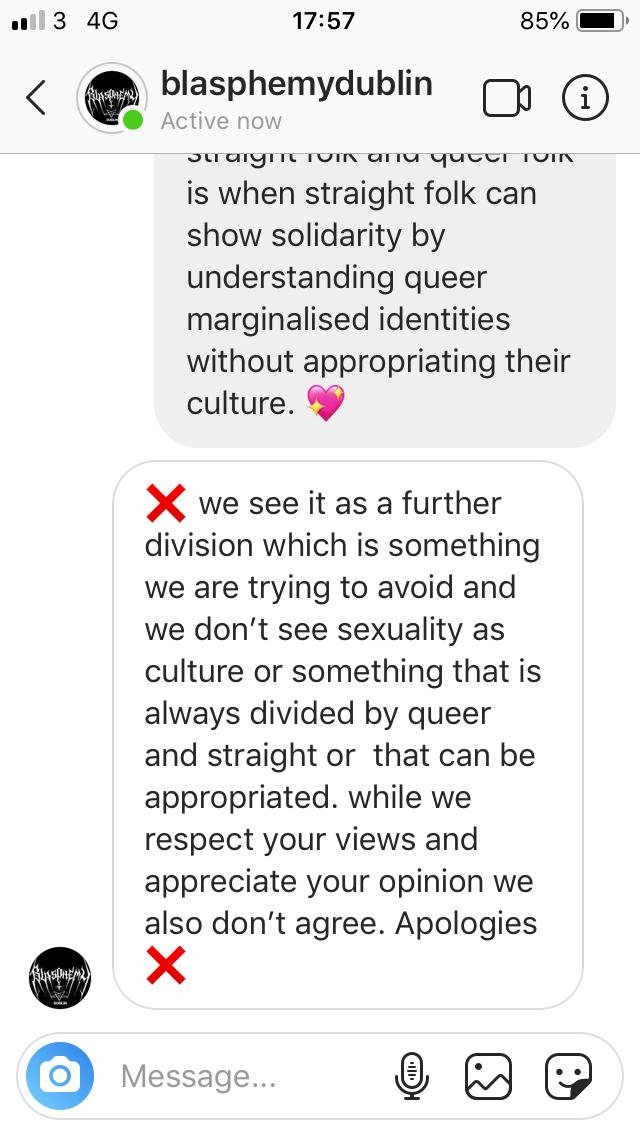 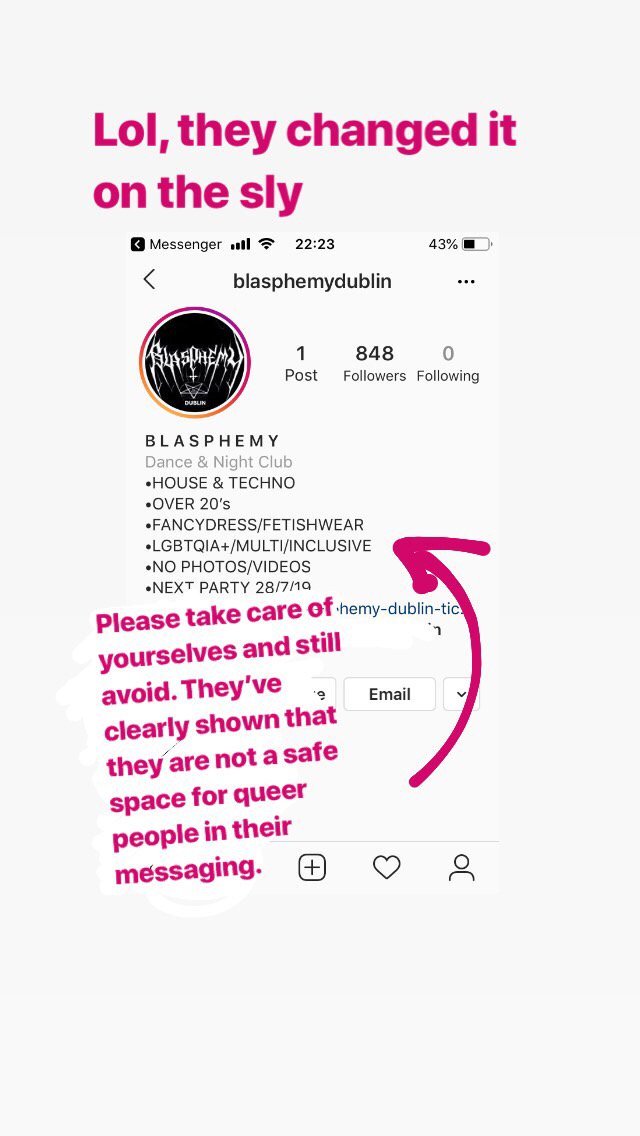 Responses to another twitter user who noticed this have been met with many people offended by this new club night.

Dublin Lesbian Line launched a study in to LGBTQIA sexual harassment based on gender and sexuality here in Ireland.

They have just released their findings and they show who women* face sexual harassment from, where and how it effects them.

They have found women* will modify behaviour like not holding hands, omitting information to certain people like work colleagues or taxi men and some feel unsafe about expressing their identity through how they dress.

LGBTQIA women* can’t even escape it in their own ‘safe’ spaces. They are still targeted.

Online the situation is even worse for LGBTQIA women* being left private messages and comments about their identity, sexuality and more.

To tackle these serious issues solutions named have been getting hate crimes legislation in place, educating Gardaí, continuing to be visible in our sexual identities and providing support.

This Pride month Greyhound Recycling and Recovery have made a feature called ‘Bin of Old Behaviours’ that finds any old homophobic or problematic tweets you made and gives you the chance to ‘recycle’ them and own up, to make social networks a less toxic place.

This is Greyhound’s attempt at tackling ‘call out culture’ where people find old tweets of others like celebrities and call them out about them.

Greyhound believes that everyone should be given the chance to recycle their thoughts and be more open and loving. We believe the current culture does not allow people to learn and grow.
Being involved in recycling, this tool seemed like a wonderful opportunity for us to use our expertise to make the world a better place,” says Michael Buckley, Owner, Greyhound Recycling and Recovery.

But to find any old tweets like this the feature looks through your old tweets that show up certain words. Only then can you recycle the tweet, with a personalised picture showing it and you redeeming yourself for it.

Not sure if you have ever tweeted something offensive or dickhead-ish? Give it a go and see.
here http://www.binofoldbehaviours.com 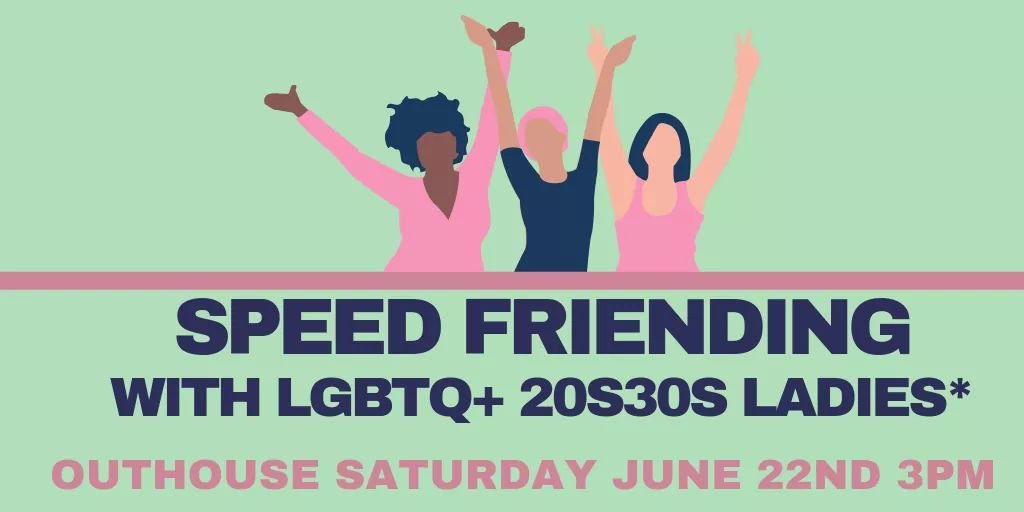 One of the things people find as they get older and busier, is that making new friends is not so easy.

Where do you go? How do you approach potential friends? Especially queer ones?

Friends we have become busy with babies, partners, work and they’re own stuff so what do we do when we realise outside of work and the few close friends we may have, there’s not really anyone else.

You go out and meet new people. Its daunting but with an event like Speed Friending everyone is there for the same reasons. They want to expand their queer circle of friends, interact with all different kinds of people.

Clicking with someone is one of the best things and having a few new friends means you’ve more people to hang out with, share interests with and chat to.

This Saturday, June 22nd at 3pm, in Outhouse our member Steph Palmer is hosting Speed Friending. This is your chance to go and socialise with others looking to make friends theres only good things to gain!

Taylor Swift has just released the video for her new single ‘You Need To Calm Down’ which is a song about how to be and LGBTQIA+ ally.

Here it is just in time for Pride.